Were you unable to attend?
Consider a donation:
via Paypal

Or
Mail to:
The Academy for Scholastic and Personal Success
PO Box 2842
Cedar Rapids, IA 52406 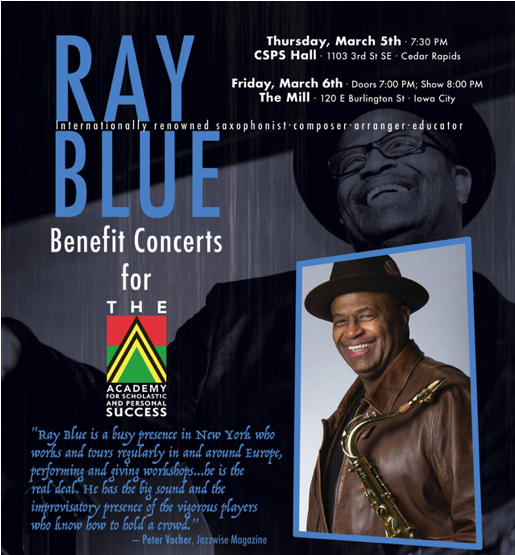 “Ray Blue has a majestic presence…when playing, his sense of purpose is obvious… It’s one thing to be a good composer, it’s another to be a great performer. Ray Blue’s got the whole package.” Jean Szlamowicz, Jazz Hot, Down Beat

He was also a cast member of the “Ray Charles Show” which toured in Germany, Switzerland, Austria and Italy 2008 to 2010.

Ray Blue consults and presents at schools, colleges, universities and community institutions around the world. He is the founder and Executive Director of CrossCultural Connection, Inc. a 501 (c) 3 non-profit organization that promotes jazz culture, performance and education. Initially founded in Cedar Rapids Iowa in 2005, the C.C.C. is now based in New York and operates internationally.

As a presenter, Ray Blue has brought numerous programs and presentations to elementary schools, middle schools and high schools as well as to colleges and universities. These include: Jazz History, Harlem Renessance; Musical Story Telling – Anti-Bullying, Good Decision Making, Honoring Our Heroes, Creating a Success Model, Celebrating the Black Family.

As an Adjunct professor at CUNY, Borough of Manhattan Community College, Ray taught in the BMI/BWI – Black Men and Black Women Initiative program. A student retention and academic success program designed for students of color. He implemented this concept in the Nelson Mandella Alternative High School in Mt. Vernon, N.Y. by introducing the “College Push” program. Ray has presented at a number of Black Student Retention Conferences and has been called upon by schools, colleges and community groups to discuss strategies for addressing the social and academic needs of children and families of color.